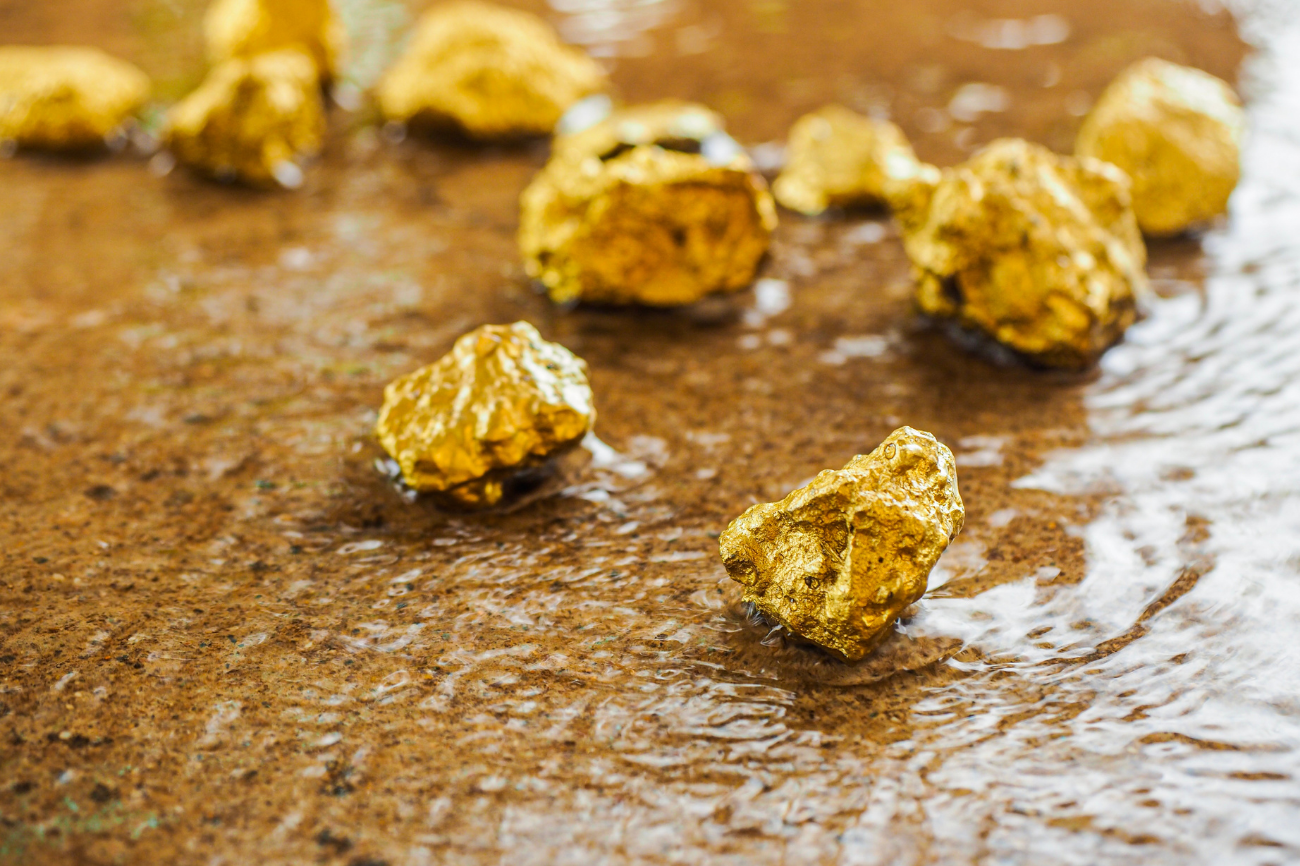 Many prospectors looking to get rich during the California Gold Rush traveled thousands of kilometers on foot, by wagon or on horseback. But for us modern-day millionaire hopefuls, any old coastline could do.

Indeed, in 1872, the British chemist Edward Sonstadt discovered rare traces of gold in seawater. At that time, scientists already knew of the silver, copper and lead hidden in the oceans of the world, but nothing as valuable as gold. Sonstadt suggested that large reservoirs could be used at high tide to trap and extract wealth from the seas (estimated at around 65 milligrams of gold per ton of seawater).

Now some experts say seawater mining could become a more attractive alternative to current gold mining practices and future deep sea gold mining – a system to collect gold and other metals gushing from hydrothermal vents, often located more than a mile below. the surface and accumulate on the seabed. Although mining in international waters should start in 2025and the International Seabed Authority has so far published over 30 exploration contracts for deep-sea mineral deposits, experts say this will irreparably lead to damage ocean ecosystems who are already struggling to fight climate change.

Unfortunately, Sonstadt’s calculations were generous. A 1990 study published by MIT scientists instead revealed that there was only about 1 gram of dissolved gold (worth about $63 today) per 100 million tons of water in the oceans. Atlantic and Pacific. If you do the math, that’s at least a few hundred billion dollars floating around, depending on the estimated volume of the world’s oceans. At such low concentrations, however, it would probably not be cost effective to extract it with the technologies we have today.

Of course, that hasn’t stopped researchers, rebellious inventors, and at least one convincing con artist from trying.

Prescott Ford Jernegan, a clergyman from Massachusetts struggling with money, contracted typhoid in the summer of 1896. While recovering, he claimed to have had a fever dream of turning sea water into gold; thus, a scam was born.

Jernegan teamed up with his childhood friend Charles Fisher, a qualified diver, to attract investors for his “Gold Accumulator” invention later that year. Standing on a pier in Providence, Rhode Island, Jernegan lowered a zinc-lined bucket filled with mercury into the water and claimed to activate a battery that provided the electrical current needed to mine the gold. Unbeknownst to the investors, however, Fisher was underwater – replacing the original mercury with previously purchased mercury-infused gold.

“There is enough gold in the waters of Long Island Sound to pay off the national debt and leave a larger reserve of gold in the treasury than the government now possesses,” Jernegan wrote in a statement. brochure about his new electrolytic sea salt company. By 1898, the successful company had raised nearly a million dollars (about $34 million today), built a series of zinc bucket inventions at a remote Maine flour mill, and hired more than 100 involuntary employees to manage the project.

Things came crashing down when a conspirator, private detective William Phelan, felt cheated out of his share of the wealth and published what he knew of the scam in the New York Herald. By the time investors came to investigate, the two scammers had fled – Jernegan and his family set their sights on Europe while Fisher was never heard from again.

During World War I, German chemist Fritz Haber led a team of scientists on the front lines, helping to weaponize chlorine gas and other chemical agents. Haber, however, was never tried for war crimes and was even awarded a Nobel Prize in 1918 for the invention of the Haber-Bosch process. The chemical method turned nitrogen into fertilizer for crops and then launched the chemical weapons industry set up during World War II.

Over the next decade, Haber secretly attempted to recover gold from sea water to help pay the massive war reparations Germany owed. He estimated that 65 milligrams of gold could be extracted per metric ton of seawater, and he and his colleagues worked hard to develop a method that relied on expensive electricity and massive centrifuges. Despite the slope investment, Haber ensured a high profit margin.

However, after Germany gave the green light to a two-year plan to study the amount of gold in the world’s oceans, Haber discovered that his initial calculations were off by 1,000%; the energy-intensive effort to extract that meager amount of gold was not financially viable after all. When Haber died of cardiovascular failure shortly after fleeing Germany (due to his Jewish heritage) in 1933, he still blamed himself for this miscalculation.

An eye for by-products

According to a article from 1934 in the New York Times, a Dow Chemicals plant near Wilmington, North Carolina, said it could collect a “three quadrillion dollar hoard” of pure gold, silver and other metals from seawater. in a decade. The plant, originally built to extract the element bromine from seawater for use in gasoline, was the first of its kind.

William Dow, the company’s president, claimed that gold could be mined just as easily as bromine – he just hadn’t figured out how yet. He outlined a plan in which gold would initially be mined as a byproduct of bromine, to eliminate the high cost of pumping huge volumes of seawater. According to Dow, the amount of water already pumped daily into the plant supposedly contained between $300 and $1,000 worth of gold ($6,000 and $21,000 in today’s dollars).

In 1941, however, Dow announced that its best efforts had “recovered only a pinhead of gold from a ton of seawater,” according to another article in the New York Times. A year later, Columbia professor Colin Fink filed another patent for gold extraction, based on its own bromide extraction process. But again, no success was reported.

Fast forward to 2012, when a Texas-based inventor named Mark Sullivan walked onto the set of the TV show shark tank. He sought an investment of 1 million dollars for his concept “Sullivan Generator“, which he said used seawater and the Coriolis force (caused by the Earth’s rotation) to produce a vapor vortex; this hypothetical hurricane could then be used to spin generator turbines and create clean energy.

To sweeten the pot, Sullivan added that byproducts of the process would include drinking water and mineral deposits, such as gold. If the 100-foot-tall Sullivan Generator sounds too good to be true, it probably is. After failing to get a shark tank investor, little has become invention in the decade since.

Swiss chemists identified a new gold-recovery material in 2018. They reported that their molecular “sponge” – a polymer filled with pores that increase its surface area – attracts between 90 and 99% of the gold ions in the water and can reduce them to shiny nuggets in just a few minutes. Even more impressive is its ability to target gold, given that other metals like copper are up to snuff. 11,000 times more abundant in sea water.

Speaking of saltwater, the material is not limited to use in the ocean. According to the study published in the Journal of the American Chemical Society, it could also separate gold from fresh water, e-waste and even sewage sludge. To recover the gold from the polymer, the chemists heated it to 1,600 degrees Fahrenheit to burn off excess organic matter, then treated it with hydrochloric acid. The resulting product was the highest carat gold (23.9 carats) ever reported for gold mined in this manner.

Unlike the other inventions on this list, the ingredients used to create the polymer are inexpensive and readily available. However, the polymer must be periodically treated with ascorbic acid to regenerate it. And when it comes to larger amounts of water — over 2 gallons, in this case — the researchers only achieved the same effectiveness after soaking the material for a few weeks.

Since their discovery, the Swiss team has worked to transform the polymer into beads that can be used in filter cartridges for running water. Their new startup, Retreevaaims to make the metals industry more sustainable by helping jewelry and electronics companies recover some of the estimated $3.5 billion worth of gold lost to waste streams during production each year.

In recent years, a growing number of searches identified a tiny rod-shaped bacterium as an ideal candidate for extracting gold from seawater. Delftia acidovorans was first identified in soil in the Netherlands, but has also recently been found in other environments. Researchers at North Carolina State University, for example, found D. acidovorans across their campusmainly in sink and shower drains.

These chosen habitats are generally toxic due to high concentrations of heavy metals, but the bacterium thrives because it secretes a peptide (called delftibactin) which neutralizes charged ions. As a result, the gold ions are transformed into nanoparticles which eventually collect in the cracks and crevices as nuggets. Researchers in Germany recently identified the genes that make this possible and successfully incorporated them into an everyday microbe, E.coli., to recover gold from electronic waste.

If you’re willing to clean out a shower drain and head straight for the nearest beach, maybe you can take a step back. So far, the amount of gold mined in this way is almost non-existent; scientists don’t exactly prepare gold bars in the lab, and it’s unlikely to be practical at an industry level. On the other hand, geologists may one day be looking for the bacteria as a quick way to determine if heavy metals are present in an area.

In truth, we are probably still a long way from extracting gold from seawater profitably. And that’s okay – metal has captured the human imagination for thousands of years. Our obsession shouldn’t wane anytime soon.