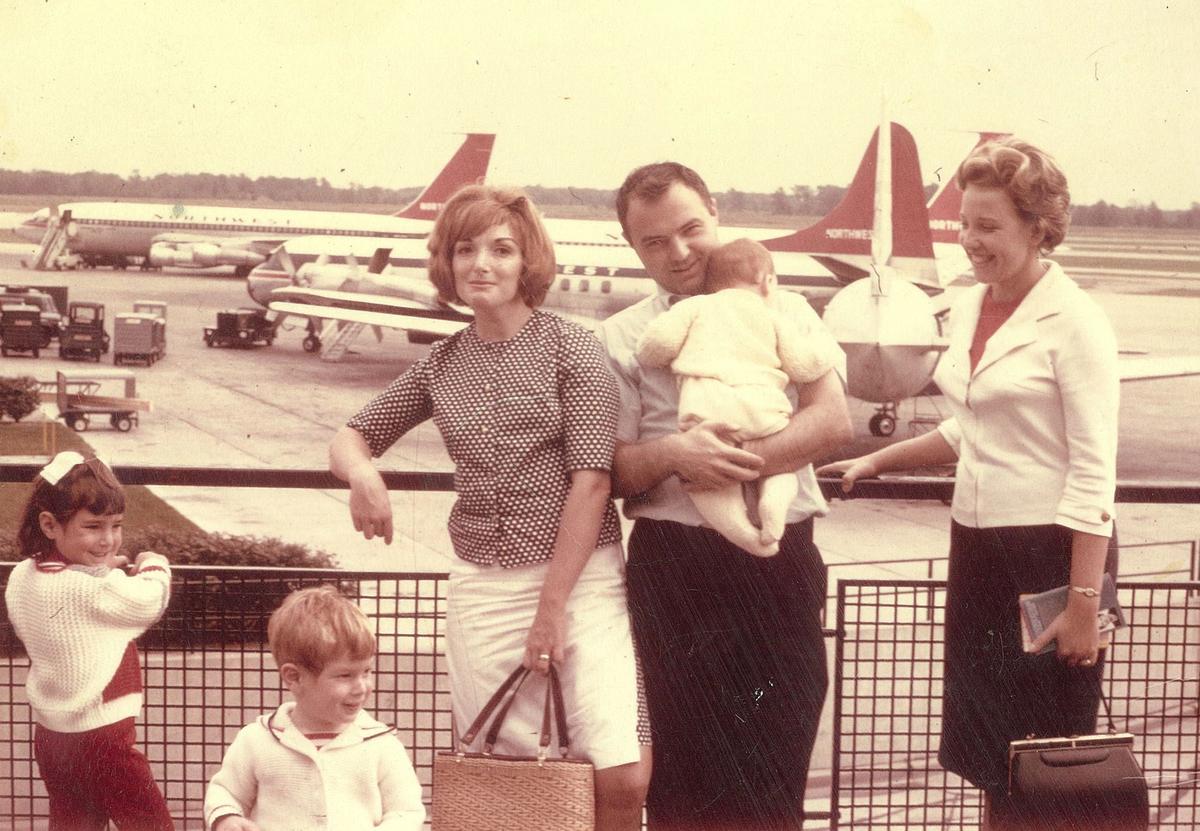 “You already have a submissive wife in this household,” I teased.

“I pay the tuition that lets you learn all that feminism bullshit,” he said, half-joking.

“Dad wants coffee,” I said to Mom in her airy Michigan kitchen, rolling my eyes as she rushed to pour him a cup, adding chip cookies, his favorite, to the saucer so that I bring them down.

She appreciated the division of labor which I considered sexist. While I adored my mother, I just wanted to escape her life.

When she was 13, my mother was an orphan on the Lower East Side of New York. When she was 15, she met my father at the Educational Alliance, a nearby settlement house. She felt blessed to have four older siblings to take care of her, hoping to have her own big family. Dad wanted to be a doctor to help his mother and sister survive breast cancer. “I just started medical school in the Midwest – are you coming or not?” was his gruff proposal four years later. She was 19 when she got married.

She supported him by working as a secretary during his formative years as they struggled with money and quotas that kept Jews out of top programs. Her boss didn’t think “a freckle-faced Jewish girl” could handle the job of office manager, until she surprised him with her guts and wit, doubling his salary. Then when Dad got a decent job, she quit at 27 to have kids.

I was the eldest, the only girl. By the time I was 8 months old, mom was pregnant again. When I was 7, I had three smart, loud, competitive brothers. Along with my dad on call at the hospital, I was “mommy’s little helper” as she changed diapers, wiped up the mud, fed and calmed the screaming boys. I was expected to help with shopping, serving meals, and clearing the table while my brothers discussed science with Dad. I felt bad for her, but I wanted out. In my mind, Dad had an exciting mission: leave in the morning, come home late, regale us with stories of stupid bureaucrats he’d fought to care for sick patients. Why, I wondered, did mom quit her fun job to stay home, cleaning, cooking, and doing laundry all day? It bothered me that she felt the need to ask dad if she could buy a dress or a bracelet like the housewives on TV.

In my teens, I was jealous of my brothers’ big bar mitzvahs, since our conservative temple only offered “dedication” ceremonies for girls when they graduated from Hebrew school. At 13, the boys put their gelt on the stock market. I was supposed to join my classmates who were planning their imaginary weddings. While my siblings were watching shows of macho cops and wrestling I was captivated by the reporter Rosalind Russell talking fast in the old movie His daughter Friday. I aspired to be an active woman, like those of This girl and the Mary Tyler Moore Showliving alone in the big city.

Mom convinced my dad to let me attend the liberal arts high school I had chosen. Yet I rebelled against their conventional values. By escaping college early and earning a graduate degree, I became a left-wing feminist dismissive of female domesticity. Mom was an excellent cook; I burned water and preferred takeout. She wore brightly colored designer clothes and adored Sinatra. A Dylan freak, I had black hair, black eyeliner, black jeans, t-shirts and cowboy boots. I chronicled my craziest dates and breakups in Cosmopolitan a decade before identifying with sex and the cityCarrie Bradshaw, Childless Dating columnist.

Like my mother, I also fell in love with a bright, bespectacled Jew, but compared to her, I married late. At 35, I wore a black dress to say “yes” to a TV comedy writer 10 years my senior, wanting to make my own rules and money. I weathered years of rejection as a budding author, not selling my first hardcover until I was 43. After arranging my older brother with a colleague from my magazine job, they married and had four children in the suburbs, making my sister-in-law the daughter my parents had always imagined. Visiting one summer, I was stung when Mom said I sounded like a broken record talking about the movie option for my book, while she kept repeating my nephew’s high math score in second grade. .

In therapy, I unraveled my rebellion. My shrink wondered if I didn’t feel up to my mother. After all, she was a domestic goddess with a rags-to-riches love affair, a quartet of children she was close to, and a beautiful home. Analyzing why I fought to be skinny, she guessed, “When your mother got fat, something terrible happened: a brother usurped you. Then a second. And a third. No wonder you prefer your body to look like a 13-year-old boy. Was that why I had reinvented myself as an urban artist dressed in black, its opposite? I knew why I had chosen my profession when I heard the phrase “writing is a way to speak without being interrupted”.

Having a warm and hilarious husband was healing. Finally able to afford it, we tried to have a baby. I was heartbroken when we couldn’t conceive, unable to play the role I never wanted to be cast in. Eventually, I thrived as an author and teacher. But with 100 students per term, some calling me their “Jewish mom,” I was afraid to make a living by taking care of other people’s children. I loved my dual career, but the setbacks were exhausting, teaching me that your work won’t love you back. As I laughed at the “Oops I forgot to have kids” t-shirt sent by another childless friend, I regretted missing out on this step. But at the time I had the desire, freedom, and financial security to have a child (through surrogacy, foster care, or adoption), my spouse was not ready. to do it. In his 50s, when he was dealing with medical issues, I nurtured and adored him, relieved to have inherited a bit of mom’s nurturing side.

The author, left, with his mother outside the family home in MichiganWith kind permission of the author

Meanwhile, when she was my age, she launched her second act professionally after my youngest brother went to college. I asked Dad why – of all professions – she started a party planning business. “As a poor little girl with a sick mother, she never threw birthday parties,” he said. Happy to deliver Mylar balloons and candy, she was more popular than my illustrious father. Then, at 65, instead of growing her business, she retired so they could focus on being happy grandparents.

“But you could be so successful!” I told him.

She was already a success, she insisted, having everything she had ever wanted, not wanting to change the dynamics of her miraculous marriage. My mother liked to let her husband take care of the bills and buy her clothes and jewelry; it made her feel adored and special.

After losing my 85-year-old father to heart failure four years ago, I was worried Mom wouldn’t function well without him. Still, she showed great business acumen, expertly managing her own affairs, which makes me wonder if she had always led the family finances while holding my father accountable in his supporting role. of family.

Visiting my ever-energetic mother, I saw how lucky I was to have parents who were supportive of my dreams so different from theirs. I regretted the condescension I had shown for his choices when I was younger. Remaining devoted to her four children and five grandchildren, she has fond memories of her two-decade career, when I never achieved my mother’s patient balance of parenthood, work and life. Maybe she understood the whole female biological clock and knew what I didn’t know: that you can have it all, but not simultaneously. Although I am blessed with the “essential forces” of Freud’s love and work, lately I find myself wishing my life was more like his.