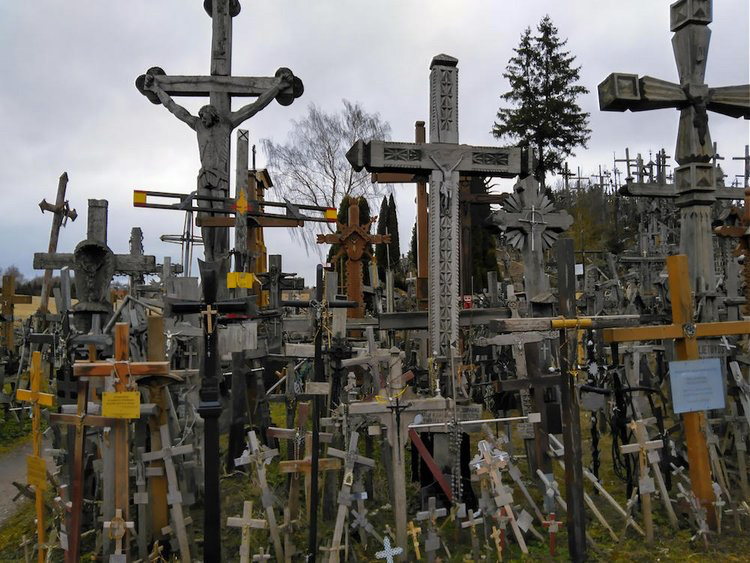 On most days of this grim winter, only a dozen visitors gather 12 kilometers north of the city to see the famous Hill of Crosses, Kryžių kalnas.

Cars arrived recently with visitors braving the cold and then left, but not before those visitors remembered the poignant origin of this monument with thoughts and prayers for the people of Ukraine.

The famous Hill of Crosses in Lithuania. Folklore says that the first cross was placed on the hill to remind others to pray for mercy and people’s health. Soon, crosses began to appear to honor soldiers who had died in battle against Tsarist Russia. Pictured: Michael Ray Smith.

A family with a baby passed by, but the bitter -1 degree Celsius weather drove them away. A group of four female university students arrived, took some pictures and quickly left. A couple who lingered longest were Diana Taujeniene and Raimondas Taujenis – both from Śiauliiai, a town in northern Lithuania where up to 10,000 pilgrims visit the Hill of Crosses each month during the summer.

“I’m emotional,” Taujeniene said, wiping away a tear with her black glove. “I am here because of the war in Ukraine.” 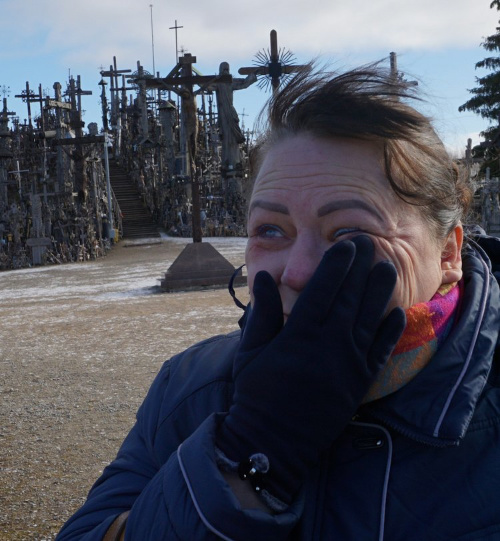 “I am emotional. I am here because of the war in Ukraine.

Nearby, a Ukrainian flag, with its distinctive blue and yellow stripes, fluttered in the wind. It was anchored to a cross and two smaller flags stood below.

The couple walked through the pits of more than 100,000 crosses doing their best to stay warm as the snow bombarded them.

“You come here with a problem, but by the time you leave it’s over,” Taujenis said. “I never leave without feeling better.”

The history of the Hill of Crosses is unclear. Folklore says that the first cross was placed on the hill, once the home of a wooden castle, to remind others to pray for mercy and people’s health. Soon crosses began to appear to honor soldiers who died in 1831 and 1863 during uprisings against Tsarist Russia. Russia disapproved of the crosses and repeatedly tore them down.

As late as 1961, the Soviets had the wooden crosses burned by soldiers. Metal crosses were used for scrap metal, and stone and concrete ones were used to build roads. Some were just buried. Locals responded by secretly planting new crosses, and over time the Hill of Crosses survived.

Since 1988, just before Lithuania’s independence, the region has gained global significance. On September 7, 1993, Saint John Paul II visited the holy site and preached a sermon as Pope. Perhaps his most famous phrase of this visit was: “The sons and daughters of your country have carried crosses to this hill, like that of Golgotha, which saw the death of our Saviour”. He went on to say that the cross is a symbol of eternal life in God.

Solveiga Tamule was the director of the Śiauliai Tourist and Commercial Information Center of the District at the Hill of Crosses for almost seven years. Its center has a souvenir shop where pilgrims can buy five-inch crosses with amber flakes for €2. Amber is a resin from the nearby Baltic Sea, and it is used to make jewelry and other items. People sometimes visit to seek a miracle, she said.

“A mother once called to say her eight-year-old daughter had cancer, and the mother wanted to visit her,” Tamule said. It was one of the saddest episodes Tamule could remember, and she never knew what happened to the girl. 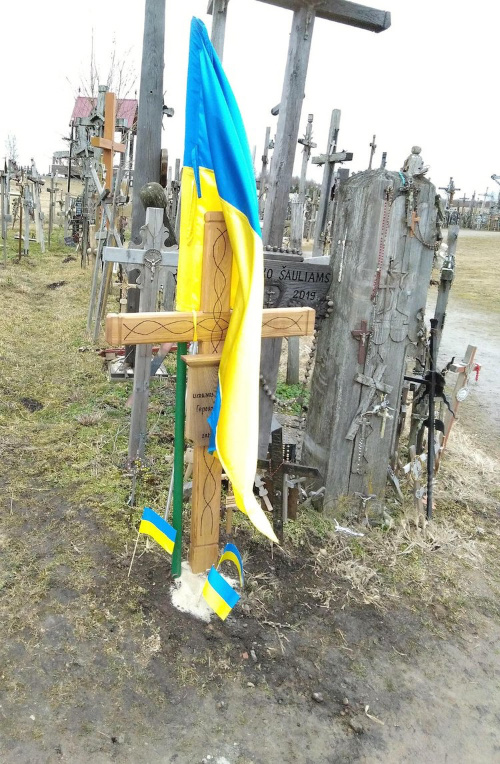 A Ukrainian flag flies next to a cross to show solidarity with Ukraine in the war with Russia. Pictured: Michael Ray Smith.

As a predominantly Catholic nation, visitors come to the Hill of Crosses for the purpose of lighting a candle for a loved one.

“No candles,” Tamule said. “Most crosses are made of wood.”

Sometimes a fire does happen, but so far the fires have been easy to put out. Another tradition is to leave a photo of a loved one.

Tamule said no one knows who planted the Ukrainian flag at the foot of the hill, but there is evidence that tributes to Ukraine are popular across Lithuania, with ribbons on Kaunas statues and backgrounds used as slides in worship services.

Nevertheless, visitors find ways to honor others. This week, a man from Klaipeda left one of the 12-centimeter crosses, a silver crucifix, a heart-shaped stone and ashes of a young relative.

In addition to crosses, others leave rosaries, coins with religious designs, silver-framed images of saints, and cloth bags – but crosses are the most common. A 40 centimeters high cross, painted yellow, made a thud when the wind blew this week. A hidden loudspeaker played sacred music in a ghostly whisper.

Throughout the day, visitors arrived by taxi or car, and like Taujeniene and Taujenis, walked up the hill, often in silence.

“There was a time when the Russians wanted to destroy this place,” Taujeniene said, a tear rolling down her face. “We are here and want to pray.”

Michael Ray Smith is Professor of Communication at LCC International University. He is a regular contributor to Religion Unplugged. His 7 days for a signature that pays book is used by some universities in their journalism programs.