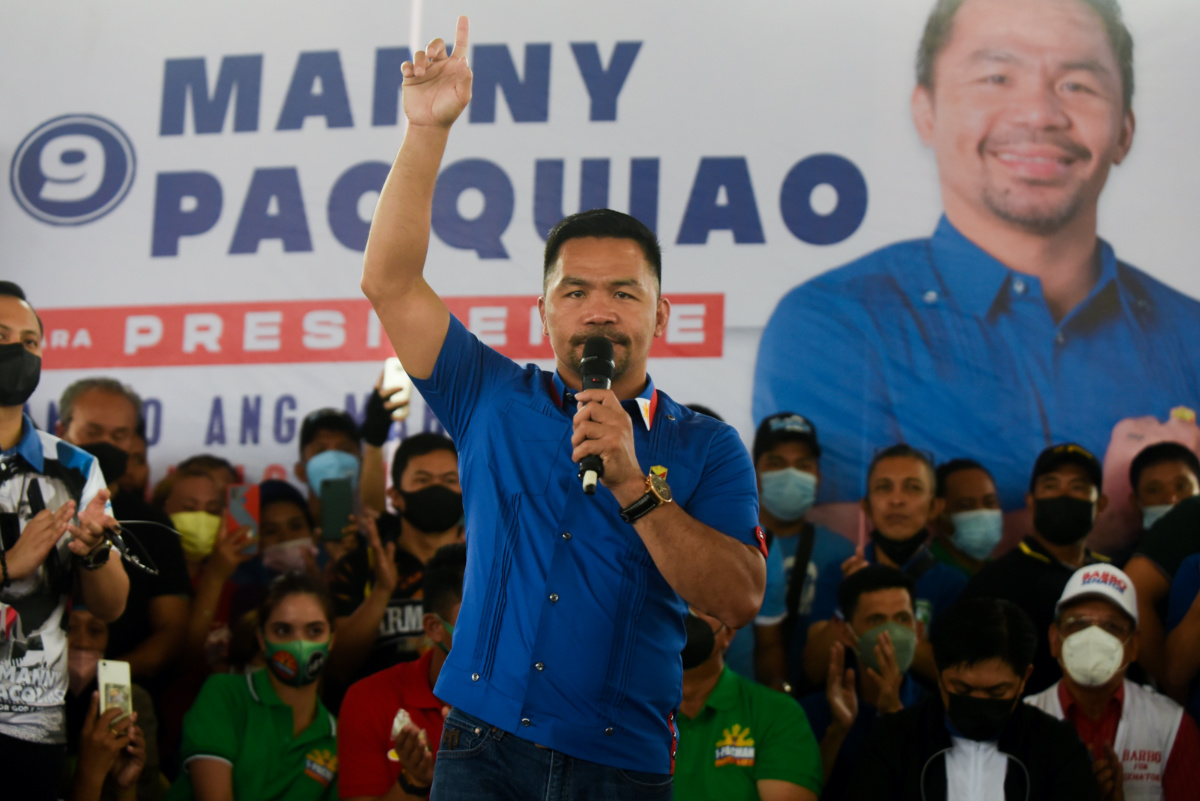 Ignoring his low rating in opinion polls, Filipino politician and former boxing star Manny Pacquiao says his poor roots make him the best person to be president, as he warned voters to steer clear of candidates tainted with corruption.

Pacquiao asked why people were backing Ferdinand Marcos Jr, the current frontrunner for the May 9 vote, pointing to the looting of the country’s wealth during the harsh authoritarian rule of his late father and namesake.

“The root cause of our country’s problem is corruption and then we would vote for a candidate who has been tainted with corruption? What has happened to us as a nation? Where is our intelligence?” Pacquiao said in an interview with Reuters on Thursday evening.

Pacquiao is in fourth place with 6% in the latest opinion poll, well behind Marcos, who leads with 56%.

The outgoing senator has made the fight against corruption a centerpiece of his campaign, vowing to step up efforts to recover the billions of dollars missing since the fall of the Marcos dictatorship in 1986, as part of his anti-corruption platform .

Marcos’ family have been accused of looting an estimated $10 billion during his late father’s two-decade reign, spending it on jewelry, real estate and works of art, including those of Pablo Picasso and Claude Monet.

“Why are we in poverty? Because we have no money? Wrong. Because of corruption,” Pacquiao said at his campaign headquarters.

Marcos’ camp did not immediately respond to a request for comment, but the contestant has previously said he cannot apologize for what his father did.

Pacquiao has also sparred with incumbent President Rodrigo Duterte over territorial disputes in the South China Sea. He said he would not be intimidated by China if he won the presidency.

“I challenge you, disturb the Filipino fishermen and I am the one you would have to face,” Pacquiao said in comments directed to China. “Being bullied is not part of my vocabulary.”

China reiterates its sovereignty claims over the disputed waterway whenever Manila complains about its actions towards Filipino fishermen.

Duterte has been criticized for not confronting China further over the conduct of its military, coast guard and fishing fleet in the waters around the archipelago, arguing it was unnecessary since Manila n was no match for Beijing’s military might.

If necessary, Pacquiao pledged to deploy navy vessels to disputed waters to protect his country’s fishermen and said he appreciated his country’s relationship with the United States, which he called “our best friend”.

The only man to hold world boxing titles in eight different divisions, Pacquiao retired from boxing in September after the sport brought him enormous wealth to propel him from humble beginnings as a dirt-poor youngster making odd jobs to survive.

Pacquiao said he was unimpressed with his low rating in the polls, convinced the poor would bring him the votes on Election Day.

His poor start made him the best person to take on the presidency because he understood what it was like to be poor, he said.

“If we’re going to discuss poverty, that’s not a concept for Manny Pacquiao. I felt and lived that and that’s why I want to lift people out of poverty,” he said.