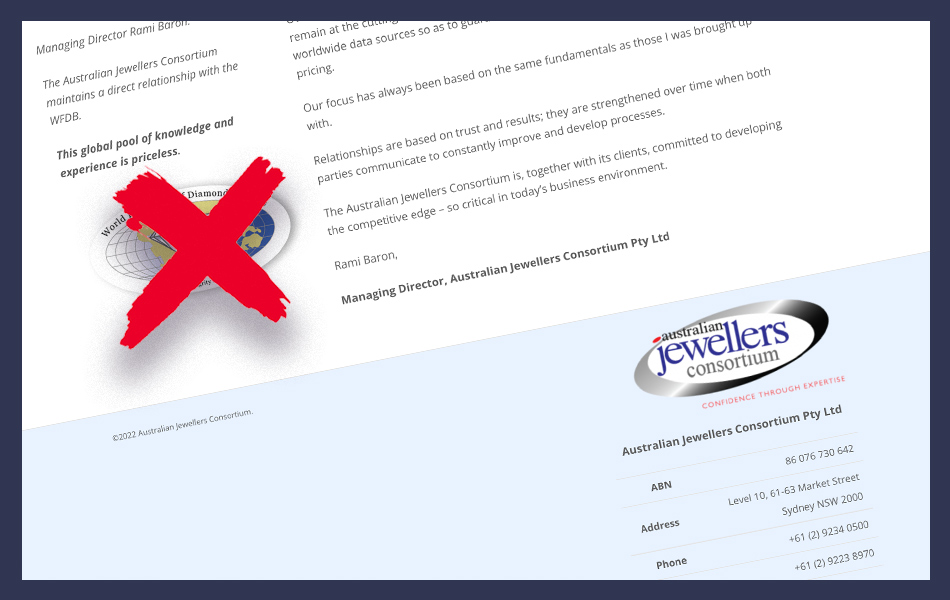 The logo of a third international organization, the World Federation of Diamond Bourses (WFDB), has been removed from the website of Jewelclaim, a private company owned by Diamond Dealers Club of Australia (DDCA) chairman Rami Baron.

In an apparent about-face, the WFDB intellectual property suddenly disappeared from jewelclaim.com.au along with the accompanying text: “The Australian Jewelers Consortium [Jewelclaim] maintains a direct relationship with the WFDB. This global pool of knowledge and experience is invaluable.

As stated earlier, Jeweler learned that the marks and logos of three international organizations in the jewelry industry were being used without permission to promote one of Baron’s many private companies.

Baron is a member of the WFDB Executive Committee – courtesy of being DDCA President – ​​and is Chair of the WFDB Advocacy Committee.

An email to Baron on Friday August 12 raising questions as to why the logos of the Gemological Institute of America (GIA), the World Jewelery Confederation (CIBJO) and the WFDB appeared on the website of his company, while said company was not a member of either organization, went unanswered.

Following the publication of an article on August 14 titled “The Mystery Behind the Diamond Dealers Club of Australia”, the GIA and CIBJO logos were removed from the Jewelclaim website without explanation.

However, the WFDB logo as well as promotional text remained on the website.

“We don’t see any problem in his [Baron] mentioning this fact on the Jewelclaim website,” Gefen confirmed.

Despite WFDB’s explanation over a week ago, its logo and accompanying promotional text now appears to have been removed just yesterday.

Since initially contacting Baron about the DDCA, he has remained silent, choosing not to explain a number of issues regarding the running of the club. Basic questions such as the precise member number were ignored.

A number of other questions about the member-based organization also remain unanswered.

For example, Baron was chairman of the DDCA for 14 of its 15 years and there is confusion as to why the DDCA was only registered with the Australian Securities and Investments Commission last year. .

Ironically, the WFDB logo appeared on Jewelclaim’s website page titled: “Statement from Managing Director Rami Baron,” which reads: “Relationships are built on trust and results; they grow stronger over time as both parties communicate to constantly improve and develop processes.

The WFDB has indicated that it will respond to Jewelry store questions when his office reopens after the summer holidays.